In galvanically isolated SCR power supplies, much of the weight and size of the supply is dedicated to a large laminated iron core transformer. This transformer is used to convert the 50-60 Hz AC Input voltage from the grid into an appropriate secondary AC voltage that can then be rectified to produce the DC output voltage. These large transformers are not required in switch mode power supplies resulting in space and weight savings. In a high-frequency SMPS, this isolation is achieved in much smaller ferrite core transformers used in conjunction with a circuit known as a full bridge converter.

A consequence of this is that electrical current is only conducted when the SCRs are passing current to the output, this results in poor input harmonics since the current waveform is not a continuous sine wave.

For example, in the case where the SCR conducts during the peak of the sine wave for both positive and negative half cycle; the current quickly transitions from zero amps to the maximum.

The resultant waveform shown above in Figure 2 can be further examined using Fourier analysis. This mathematical process breaks any waveform into an infinite summation of sinusoids with varying magnitudes and frequencies. What we find with this process is that in the example above, a large component of the current resides in the third harmonic of 180 Hz. Figure 3 below shows the magnitudes of the harmonic currents for the even and odd harmonics of 60 Hz. These levels are well above the IEC61000-3 limit. 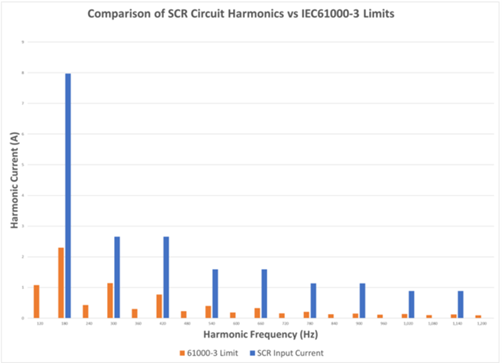 In addition to these individual harmonic levels being over the limits, the aggregate or Total Harmonic Distortion (THD) is 63%. The IEC61000-3 limit for THD is 15%.

ATDI’s 3.8 kW Mercury Flex SMPS utilizes an active power factor corrector or PFC. This circuit monitors the input voltage and current and ensures they are both in phase with each other and are continuously sinusoidal. The Mercury Flex has a THD of 9.57% at an output power of 3.8 kW, well within the 15% limits for IEC61000-3.

This ability to control the voltage or current applied to a load at any time, in conjunction with the greater power density and superior input harmonics, makes ATDI’s MercuryFlex an excellent alternative to aging SCR/Thyristor based power supplies. Contact your local ATDI representative today to learn more about the MercuryFlex Power supply!