Power converters present unique challenges in electronic packaging and heat management. Their concentration of electrical energy, propensity for electromagnetic interference generation, integration of heavy, irregularly shaped magnetic components, and requirements for compromised reliability and affordable cost oftentimes requires the use of liquid cooling. Historically, copper has been the material of choice when liquid cooling is utilized for the system's wetted elements. However, given its cost and weight advantages, the latest generation systems have been turning to aluminum for wetted elements.

Download the Liquid-Cooled Power Supply Brochure to learn more about our solutions.

Thanks to the advancements in the electronics industry, high-power electronic systems continue to become smaller and more space efficient. While air cooling remains the preferred method for a wide range of applications and power levels, liquid cooling has been gaining traction due to the demand for higher power from smaller packages. Typical liquid-cooled systems utilize copper or aluminum cold plates as a heat transfer material due to their superior thermal conductivities and wide availability. While copper is considered to be the preferred material for high heat flux applications due to its higher thermal conductivity, aluminum offers significant cost savings and weight reductions for moderate heat flux applications.

Among the concerns in liquid cooling for electronics are potential cooling system leaks or cooling effectiveness degradation due to pitting and/or galvanic corrosion.

Pitting corrosion is the erosion of metal at remote locations where a hole or a cavity is formed. Pitting erosion in water is affected by many factors; among the most significant is the presence of chlorides and pH levels of the water.

Galvanic erosion occurs when two dissimilar metals are electrically connected in a conductive solution. The greater the separation in the anodic index for the two materials, the greater the galvanic corrosion potential and risk become, where the least noble metal starts corroding preferentially. 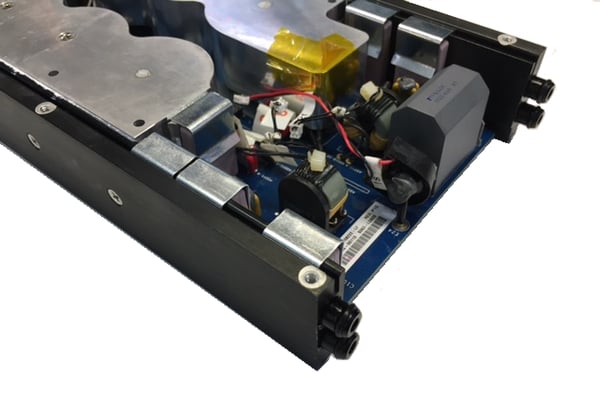 These parts are critical to performance, especially in applications where corrosion inhibitors are not used, or there are copper components present in the same cooling system (such as wetted components in a chiller).

Either of these may promote galvanic corrosion. For this reason, an extensive study was conducted to evaluate pitting and galvanic corrosion resistances of 6063-T5 aluminum with various coatings in fresh water and de-ionized water applications.

The investigation was conducted in two phases. In Phase I, an experiment was conducted to visually examine the effects of un-plated or anodized aluminum plates (alloy 6063-T5) when commingled with un-plated copper in tap (fresh) water. For this, a closed circulation loop was designed, as pictured in Figure 2, and surface conditions of samples were monitored over 14 months.

In phase II, aluminum plates with three different coatings were sent to a NADCAP-approved third-party lab to perform pitting and galvanic corrosion testing to quantify corrosion rates both in tap and de-ionized water applications.

Phase I testing was intended to provide a qualitative evaluation of corrosion resistances of un-plated and anodized aluminum (per MIL-A-8625F8 Type II with Nickel Acetate Sealing) samples by running a long-term testing, where samples were installed in closed loop circuits and surface conditions were visually examined periodically for signs of corrosion over the course of 18 months.

For this purpose, a closed-loop cooling circuit was created. For each type of sample, two aluminum plates were mounted with an un-plated copper bar between them without being in contact. Water in the systems was replenished every 2 weeks.

Evidence of corrosion on the unprotected surfaces started to emerge within the first couple of days of testing and progressively worsened over time. At the end of week 16, the samples were taken out of the setup and visually inspected. The un-plated sample experience heavy pitting corrosion, where while aluminum oxide formation covered the entire plate. Testing on the un-plated aluminum samples was halted at this point.

The anodized aluminum sample after 16 weeks showed no signs of corrosion so it was kept in the circuit for prolonged testing. After 14 months of testing, the anodized sample was taken out of the setup for inspection and no signs of visible corrosion existed.

Phase II testing was intended to provide more comprehensive analytical data on the corrosion resistance of various coatings on aluminum alloy and 6063-T5 for both tap water and de-ionized water applications. Two separate sets of experiments (for pitting and galvanic erosion) were conducted at a NADCAP approved third-party laboratory, to characterize the corrosion resistance of 6063-T5 aluminum alloy having three different finishes namely, Type II anodize, nickel plating, and tin plating according to the following specifications:

Samples were mounted to support rods with conductive tape and the connection was masked with a polymeric film. Test solutions were either local tap water (Lansing, New York) or distilled water with 1ppm sodium phosphate. Sodium phosphate was added to the DI water to improve the ionic conductivity, necessary for corrosion cell operation, without influencing the test results. (At levels of approximately 500ppm, sodium phosphate is often used as a corrosion inhibitor for aluminum alloys).

Tests were conducted using ASTM G61 as a guide. Test temperature was 50 degrees Celsius for all tests except one test of nickel-plated aluminum at 3 degrees Celsius. All solutions were continuously bubbled with compressed air at a rate of approximately 150cm3/min.

Corrosion rates were then calculated using the equations found in ASTM G 102 (Standard Practice for Calculation of Corrosion Rates and Related Information for Electrochemical Measurements). The density for the anodized aluminum was 3.95-g/cm3, for nickel 8.9-g/cm3, and for tin 7.3-g/cm3. The equivalent weights were 8.5, 29.36, and 59.34, respectively.

Galvanic corrosion testing of aluminum samples with un-plated C11000 copper in tap water was also conducted. For this purpose, samples were lightly polished with 600-grit SiC prior to testing. Samples were then mounted on a steel rod using electrically conductive tape. (Note, the presence of the steel rod connecting the samples provides an enhanced pat for galvanic corrosion to occur and thus represents a highly conservative test method).

Testing was performed using the guidance of ASTM G71 (Standard Guide for Conducting and Evaluating Galvanic Corrosion Tests in Electrolytes). The potential was monitored using a saturated calomel electrode (SCE) as the reference electrode. For this test, the aluminum sample acts as the anode and the copper sample acts as the cathode. Testing was conducted for 168 hours at 50oC using local tap water aerated at a rate of approximately 150-cm3/min. The exposed area for each sample was approximately 4 cm2 with a cathode-to-anode area ratio of 1 +/- 0.05.

Test results showing the corrosion potentials and current densities as a function of time are shown in the following figures, for anodized, nickel plated and tin plated samples, respectively. The data from the final day of exposure were used to calculate the long-term average current density and the corrosion rates using the same equations found in ASTM G102 Standard. 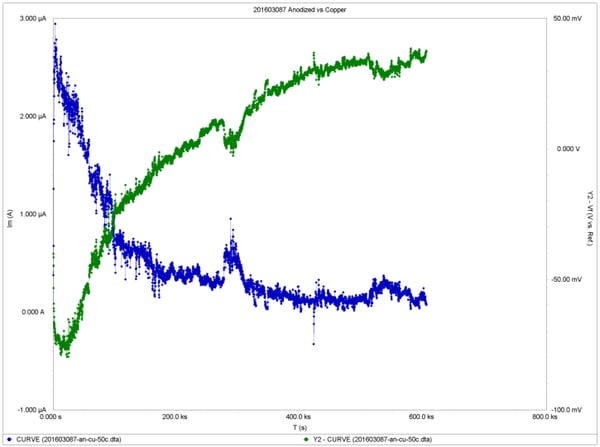 Note at a plating thickness of 0.1mil, minimum, the anodized aluminum heat exchanges used in LiquaBladeTM, taking into account the highly conservative nature of this test, project a useful life of well over 10 years before galvanic corrosion would begin to degrade the underlying aluminum material.

A two-phase investigation on the corrosion resistance of aluminum alloy 6063-T5 in water-cooled packaging applications was carried out. In the first phase of the inquiry, a qualitative evaluation of corrosion development on un-plated and anodized aluminum samples was performed. Results revealed that corrosion develops rapidly on un-plated aluminum surfaces and oxide later forms within days. After only 16 weeks of testing, the sample exhibited signs of severe pitting corrosion. In contrast, an anodized aluminum sample showed no signs of corrosion sites even after 14 months of continuous testing.

To further the investigation, a more comprehensive analysis was conducted to evaluate the corrosion resistance of anodized, nickel-plated, and tin-plated aluminum in tap and de-ionized water, as well as with copper in the system as the dissimilar material. With this study, both pitting and galvanic corrosion rates were quantified.